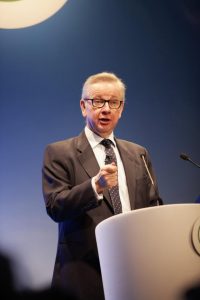 Not only do these innovations have the potential to raise agricultural yields and productivity while ensuring inputs are used more efficiently, but he believed the UK could be a world leader in their development with sufficient investment and a robust ethical debate.

The minister expanded on his support for gene editing technologies in questions after his presentation. He differentiated the technique from genetic modification, which has tied EU regulators in knots for the past two decades. Unlike GM which introduces foreign DNA into a cell, gene editing simply manipulates what is already there. But the technology effectively speeds up evolution and selective breeding, he said.

Mr Gove likened the early potential of this innovation to Norman Borlaug’s pioneering plant breeding work in the 1950s and 60s which ushered in the third agricultural or green revolution. This enabled the massive expansion of quality food production to support the rapidly growing world population at the time.

He agreed that ethical concerns over the technology must be addressed, calling for transparent policies to govern the use of gene editing. But he also warned against its potential benefits being lost through those who opposed such innovation as “a matter of faith”, supported by well funded, single issue pressure groups.

The government is committed to supporting the development of such technologies where it can, Mr Gove concluded, through its research and innovation budgets, with subsequent extension work through academia and research stations to ensure that the investment is effective at farm level.