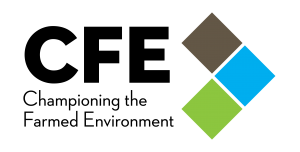 The original Campaign started in November 2009 as a self regulated scheme, agreed between industry and government, as an alternative to compulsory set- aside in the UK.

The EU set-aside rules, a CAP mechanism to reduce over-production, were in place between 1992 and 2007. Although unpopular, an unintended consequence of land-idling was the environmental benefit – particularly as a habitat for wildlife and farmland birds. So the CFE sought to retain these, while simplifying the existing ad hoc environmental rules for participating farmers.
Ten years on, the new CFE will continue to support farmers to deliver environmental benefits as part of a productive farming business. It will support events around the country, delivered by the CFE’s established network of regional coordinators, to inform farmers and industry partners about the future direction of the project and encourage involvement.

There is also a new CFE website, based around the central campaign themes of soils, water, air and wildlife, advising farmers on how to produce environmental benefits within the operation of a sustainable farm business.

“With more focus on environmental public goods in everyday farming practices, the work of the CFE is more important and more relevant than ever,” says CFE project officer Laura Harpham. “The government’s 25-year Environment Plan calls on the farming community to balance the production of safe, traceable and high-quality British food with the protection and enhancement of the British countryside – clean air and water, healthy soils and a flourishing natural environment.”

The CFE was originally founded by the AIC, CLA, NFU and the Game and Wildlife Trust, with support and advice from bodies including Defra, AICC, LEAF, AHDB, Catchment Sensitive Farming and the Bumblebee Conservation Trust.