A Bartholomews agronomist has won the 2019 Barrie Orme Shield for the best performance in the BASIS Certificate in Crop Protection examination over the last year. 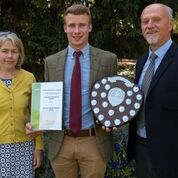 Richard Harris is a 26-year-old agronomist from a South Devon family arable farm, who now works for the Chichester-based agricultural merchanting business. The runners-up were Helen Brown of Hutchinsons; Joe Bagshaw from Syngenta and Vicky Tait of T G Tait & Sons.

“As part of my Harper Adams studies, I spent a placement year working on a mixed farm in Hampshire to broaden my practical knowledge,” says Mr Harris. “Here, it quickly became clear that agronomy was the area I wanted to specialise in.

Shortly after graduating in 2015, he enrolled in the Bartholomews academy graduate scheme, where he gained experience in every sector of the business including seeds, grain, fertiliser and agronomy.

“During the agronomy rotation I participated in BASIS training to develop my understanding of crop protection and how each different aspect can complement one another, for sustainable long-term production,” Mr Harris.

“I found that using a pre-emergent combination of pendimethalin and flufenacet on a crop of spring barley, drilled at a high seed rate, gained the best levels of control. This meant the autumn flush of blackgrass was missed, allowing the crop to outcompete the suppressed weed population.

“This highlighted the importance of an integrated approach, implementing cultural methods and cropping patterns before using pesticide application as the final piece in a complex jigsaw,” Mr Harris concludes.

With the Crop Protection Certificate in hand, as well as FACTS and Crop Inspecting qualifications, Richard completed the Bartholomews graduate scheme and is now practicing as a full-time agronomist in the South West region. He intends to undertake the BASIS Diploma in Agronomy in future.