The UK oilseed rape market is slowly working out the last of the old crop as it watches developments around the world – notably in the US where wet weather has slowed plantings dramatically. The domestic rapeseed area appears to be well down.

“It’s very quiet,” John Thorpe, senior trader oilseed rape at Openfield Agriculture, told Agritrade News. “There is another six or seven weeks to go in a market which hasn’t been helped by the political uncertainty. 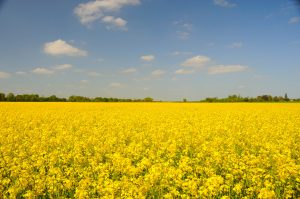 “The whole thing just lacks liquidity,” he observed. “It’s a question of how much more rapeseed consumers need for the rest of the season and how much is out there.”

“The next crop marketing year is going to be a lot of fun and games,” Mr Thorpe continued. “Obviously the plantings are down. We are trying to put all the figures together. Normally you see a patchwork of yellow, but this time round it doesn’t seem like that.” Part of the reason is the Cabbage Stem Flea Beetle problem. “Some crops have been pulled up in recent months because of continued damage from the flea beetle,” he said.

EU wide, AHDB reported on Tuesday that Oilworld had cut its forecast for the EU’s oilseed rape crop to 17.7 million tonnes, significantly down on an earlier Commission forecast of 18.7m tonnes and the 19.2m tonnes from the 2018 harvest. Meanwhile, EU grain trade organisation COCERAL released its estimate of 17.86m tonnes on May 21st.

Mr Thorpe noted that US soybean plantings are now falling foul of the wet weather there, which has already affected corn (maize), which is planted earlier, much more seriously. “It has delayed the corn and it might have an impact on the soybeans as well, or would they switch maize area to soybeans?” he wondered, noting of the market that “there is a reasonable amount of strength there.”

The markets reacted quickly. “It raced up and then down again,” Mr Thorpe said. “It was a knee jerk reaction to plantings being so low in some states. Illinois, for example, had got just 14% of the crop in the ground. Last year it had reached 89% by this point. South Dakota had 6% of its crop in the ground, against 56% last year.

The crop outlook in South America is more positive. AHDB reported that “as at 23 May, the Buenos Aires Grain Exchange pegged harvest at 85% done, with excellent yields.” The forecast for final production is 56.0m tonnes – 18.2m tonnes more than last year.

The levy body also pointed out that the US/China dispute continues to weigh on sentiment in the oilseeds markets worldwide, with US soybean exports down 37% as at May 16th, potentially increasing global stocks.