The one-off NIAB Centenary Cereals Cup Award was made at this week’s Cereals Event to mark the 100 years since NIAB was founded in 1919.

Robigus was a nabim Group 3 variety which featured on the HGCA Recommended List between 2003 and 2011. Originally bred in The Netherlands by , it was selected at an early stage by John Blackman at CPB Twyford, which is now KWS-UK.

When first recommended, Robigus had a 4% higher yield than existing stalwarts Claire and Consort, and was the first high-yielding variety to feature orange wheat blossom midge resistance.
While it was not the most commercially successful variety of its time – Riband and Consort enjoyed greater sales – the judges selected Robigus from a field that included Capelle Desprez, Hereward, Riband and Consort wheat and Maris Otter, Golden Promise and Pearl barley, due to its legacy as a parent. Half the 80 RL wheat varieties since 2014, including RGT Gravity, LG Skyscraper, Gleam and LG Spotlight, include Robigus in their parentage.

“There have been many good and some excellent varieties over the past 100 years, but none can match the contribution Robigus has made to variety progression and it is fitting that NIAB has chosen to recognise this legacy with the award of the Cereals Cup,” says Andrew Newby, KWS UK managing director.

A panel of NIAB technical director Bill Clark, plant breeder Dr Phil Howell and cereal variety specialist Clare Leaman considered 100 years of cereal varieties grown in the UK and assessed them in terms of agronomic value, market influence and lasting impact, most notably in their use in plant breeding programmes.

Mr Clark says, “It takes a truly exceptional variety to win the NIAB Cereals Cup in a normal year and we can go several years without making an award. However, this year is a little special for NIAB as we celebrate our Centenary and we wanted the Cereals Cup to have a role in our celebrations with this once-in-a-lifetime award. There were many worthwhile candidates, but the variety that stood out was Robigus.” 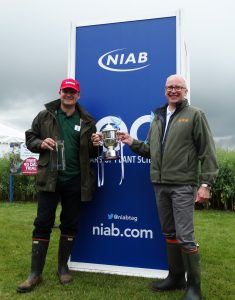