In a major industry consolidation, the UK’s largest integrated pig producer and processor has been bought by the US multinational poultrymeat business that already owns the UK’s Moy Park integrated poultrymeat operation. The deal, which will require regulatory approval, is expected to complete in the coming months.

The Colorado-based Pilgrim’s Pride Corporation has agreed to acquire Tulip Limited from Danish Crown in a deal worth £290 million. The company says the move will increase its UK portfolio diversity while creating a leading European prepared foods business – it claims to have 21% of world prepared food sales. The deal includes a long-term supply agreement for Tulip to continue sourcing Danish pork through Danish Crown.

Tulip, with 15% of the UK’s sow herd, produces some 1.5 million pigs per year – 1m through its BQP operation with the remainder sourced from 600 independent units. It also imports Danish products from its parent to augment UK supplies, and claims to have 30% of the UK pigmeat market. In addition, the business sources lamb from 450 UK suppliers with additional volume brought in from New Zealand out of season. Tulip has an annual turnover approaching £1 billion and employs 6,000 people in the UK.

Pilgrim’s Pride was established in Texas in 1946, growing rapidly to become a major meat packing business with operations in 14 US states, Puerto Rico and Mexico in Central America as well as the UK and Europe. In 2009, Brazilian meat processor JBS acquired two thirds of Pilgrim’s equity, which it has increased to 78.5% over recent years.

In June 2015, JBS bought Moy Park, Northern Ireland’s largest company with a 25% share of Western Europe’s poultry meat market, from Marfrig Global Foods, also based in Brazil. But two years later it sold the business to its US subsidiary Pilgrim’s in a forced sale to raise funds after a Real$10.3 billion fine by the Brazilian authorities, following an investigation into financial corruption at the company.

Pilgrim’s Pride says the addition of Tulip’s 12 fresh meat and food manufacturing operations in the UK “solidifies Pilgrim’s as a leading European food company, creating one of the largest integrated prepared foods businesses in the UK with a portfolio of brands and retail private label products”.

“We are pleased to strengthen our European foods platform with the acquisition of Tulip, which positions Pilgrim’s as a leading global prepared foods player,” states Jayson Penn, Pilgrim’s global chief executive. “The transaction represents the logical next step in our evolution to expand our geographical footprint, enhance our value-added portfolio and reduce volatility across our business with a more stable margin profile. Tulip’s integrated production platform, consumer ready innovation capabilities, well-invested assets, established customer relationships and strong leadership team will solidify Pilgrim’s platform for growth in the attractive UK market.”

Jais Valeur, group chief executive at Danish Crown, adds: “Pilgrim’s is already strongly positioned within the UK chicken market and would like to strengthen its position within the market for pork. On our part, we want to simplify our UK business. Going forward we will supply Danish pork to Pilgrim’s, so all in all the transaction holds out interesting perspectives for both parties.” 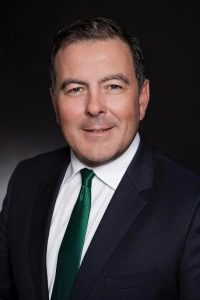 “Pilgrim’s is acquiring an industry-leading farming operation, a strong team of dedicated people and a network of well-invested manufacturing sites,” says Tulip chief executive Andrew Cracknell. “Our companies share a rich heritage in agriculture and food production with aligned values that put people and customers at the heart of all we do. The Tulip Limited leadership team and I look forward to working with our new colleagues to build upon the fantastic progress made within the business and realise our combined growth opportunities as we enter an exciting new phase.”

Mr Cracknell was appointed last October to turn round the business after two years of significant losses – £31m in 2017/18 following £27m in the previous 12 months – which were reducing Danish Crown’s group profitability.