Route to zero farm emissions by 2040

The National Farmers Union (NFU) has set out its plans for achieving net zero greenhouse gas (GHG) emissions rom British Agriculture by 2040 – a decade ahead of the government’s ambition for the whole UK economy. 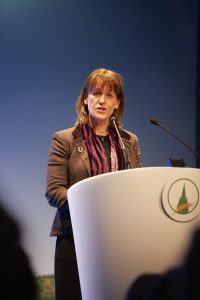 NFU president Minette Batters first announced the net zero by 2040 goal at this year’s Oxford Farming Conference in January. British agriculture accounted for 10% of the UK’s GHG emissions in 2017, emitting 45.6 million tonnes of CO2 equivalent. While farm emissions have fallen by 16% since 1990, progress has slowed since 2011 when the industry GHG Action Plan was agreed.

The union has now issued a report outlining how the 2040 objective can be achieved. It sets out three pillars for the process – increasing the productive efficiency of agriculture; using land to capture more carbon; and increasing the bioeconomy, including renewable energies.

Farming emissions can be reduced through a wide variety of technologies and practices that lift productivity and maintain or even increase farm output using fewer inputs, through smarter working. These include fertiliser treatments, feed additives, plant breeding technologies, precision farming, anaerobic digestion plants, soil management to reduce cultivations and healthier livestock. These have the potential to save 11.5m tonnes of CO2 equivalent each year

A further 9m tonnes of carbon could be saved through improved land management – helping the industry capture more carbon by planting more trees and increasing hedgerows and woodland; enhancing soil organic matter and using grassland and pasture to store more carbon. Enhanced soil and grassland management has the potential to save 5m tonnes of carbon annually on its own.

But the biggest potential saving is through the third pillar, displacing GHG emissions by moving away from fossil fuels and removing carbon dioxide from the atmosphere through increased use of bioenergies and bio-based materials. This could save 26m tonnes of CO2 annually by producing energy from organic matter and storing the carbon produced, as well as greater use of materials such as hemp fibre and sheep’s wool in construction and insulation.

“There is no doubt that climate change is one of the biggest challenges of our time, one which is rising rapidly on the political agenda both at home and globally,” notes Ms Batters. “Representing British farming, we recognise our unique position as both a source and a store for greenhouse gas emissions and, importantly, how we can build on our work so far to deliver climate neutral farming in the next 20 years.

“We know that there is no single answer to the climate change challenge facing us all. That is why we must work across a range of internationally recognised inventories and utilise the best available science, working in partnership with concerted support from government, stakeholders and the wider supply chain. This ‘white paper’ provides a strong foundation on which to talk to others about joining us on our journey.