ForFarmers officially opened its Exeter feed mill last week after a £10 million redevelopment project that involved a complete rebuild of the plant.

“Investment in manufacturing and logistics, of which the Exeter mill’s rebuild and restructuring has been a major part, has been key to the development of the business,” he noted. “The significant rebuild and restructuring process over the last two years has increased the mill’s output capacity from 140,000 to 300,000 tonnes of animal feed a year.

“The use of data to help drive future farm development and productivity and the continued investment in high quality people through the ForFarmers training academies are also key themes as we take the business forward.

“The redevelopment is an exciting step forward and after years of hard work and significant financial investment, it is great to see the Exeter Mill running to its full potential,” concluded Mr Read. “The redevelopment will have a really positive impact on our UK business as a whole, but especially our South West based customers.” 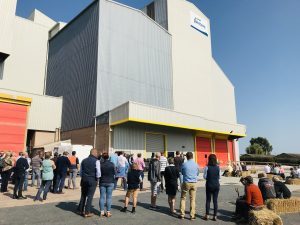