The Carr’s Group’s Agriculture division has maintained profitability and revenues at near previous year levels, despite a 10% fall in feed sales. 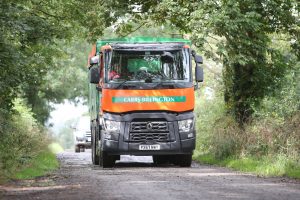 Compound feed volumes declined 10% against the very high prior year production figure when the late spring and very dry summer lifted feed demand across the country. Like all manufacturers, the CBA volume fell in the latest year due to the mild winter weather. The company says that “effective procurement and good forward positions on raw materials helped to mitigate the negative impact on profitability of the weather”.

UK feedblock sales were down by 16.4%, again in line with the different weather in the period.

Carr’s network of CBA rural stores saw a 0.9% increase in overall revenues, and a 2.1% rise in like-for-like sales. But farm equipment revenues were 2.8% lower – against a record prior year – with new machinery dropping 4.8%. The company attributes this to reduced farmer confidence to invest with the ongoing Brexit uncertainty.

Internationally, the Group’s feedblock sales volumes were 6.4% lower. US sales fell 2.5% year-on-year as wetter weather encouraged forage growth with less need for supplementary feeding. A new manufacturing plant in Tennessee came on stream, allowing expansion into the east and south eastern US states, while the business is also moving into the Canadian market from its South Dakota plant. European sales from the German joint venture facility were down 8%, again due to the milder weather.

Last year’s acquisition of the livestock bolus business Animax is now fully integrated and contributed £0.6m to operating profit. The Suffolk premises is being remodelled as the Group’s R&D centre of excellence for its supplements business, to increase the breadth of its range of complementary ruminant livestock performance products.

“In the context of a particularly challenging market, driven by unseasonal weather – in marked contrast to the previous year – and uncertainty created by Brexit, our Agriculture division has delivered a robust performance,” states Carr’s Group chief executive Tim Davies.

The current financial year has seen the Agriculture businesses trading in line with expectations. “We remain confident in the medium-term prospects for the Agriculture division, and continue to plan for Brexit with our customers, suppliers and trading partners,” continues Mr Davies. “In the UK, farmer confidence is becoming increasingly impacted around Brexit – in particular, the future trading arrangements with the EU and the rest of the world.”

Outgoing chairman Chris Holmes adds: “We are pleased to have delivered a strong financial performance in the year, moderately ahead of the Board’s expectations, despite unseasonable weather significantly impacting trading across our Agriculture division.

“We are excited by plans to develop Animax into a centre of excellence for innovation and product development for the wider Agriculture division. I am confident, as I step down from the role of chairman at the AGM in January, that I leave the company in an excellent position to build upon on its strong market positions and capabilities, expand its international footprint and deliver sustained growth.”