The latest figures showing a further annual fall in antibiotic usage by the UK livestock industry have been welcomed by regulators and industry alike.

The UK Veterinary Antibiotic Resistance and Sales Surveillance (UK-VARSS) report for 2018 from the Veterinary Medicines Directorate (VMD), published this week, shows that 226 tonnes of antibiotic active ingredient were sold for animal use in the UK during 2018, 9% down on the 248 tonnes in 2017. The latest total is 49% lower than the 448 tonnes used in 2014.

There was a further reduction in the Highest Priority Critically Important Antibiotics (HIP-CIA) category – those with the greatest implications for human healthcare – to an average 0.21mg/kg (0.26mg/kg in 2017), although these medicines remain a tiny proportion (0.7%) of overall animal antibiotic usage.

The sales of veterinary antibiotics for use in food producing animals, adjusted for animal population, fell by 9% to 29.5mg/kg from 32.5% in 2017, and by 53% from the 62.5mg/kg in 2014. But there was a small year-on year increase in the turkey, broiler and dairy sectors, although the sample size for latter is very small. 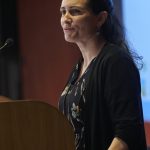 Kitty Healey, head of antimicrobial resistance (AMR) at the VMD, unveiled the 2018 figures at the biennial Responsible Use of Medicines in Agriculture (RUMA) alliance conference in London this week. She welcomed the overall decreases, while cautioning that the slower rate of reduction shows that the rate of fall may be bottoming out and finding its own level – the slowing of the rapid progress since 2014 perhaps indicates that the “quick wins” available have been achieved, she said.

Zero usage is not compatible with high animal welfare standards, Ms Healey stated – there will always be a need for some treatments – although it is not clear what the ‘right’ level is yet. But responsible usage of available medicines is vital to ensure they remain effective for as long as possible.

She congratulated the industry for meeting the O’Neil report target of 50mg/kg by 2018 and being on course to fall below the 30mg/kg figure for 2020.

Chair of the Food Standards Agency Heather Hancock welcomed the “impressive achievement” but warned of “dramatically high levels of antibiotic usage in agriculture outside the EU”. She committed to working with other government agencies to stop the supply and use of unregulated antibiotics in the UK, referring to a recent seizure of illegal Chinese products at a poultry unit in Northern Ireland.

Ms Hancock said there were no plans to change UK feed and food standards post-Brexit, noting that the FSA has increased its staffing and introduced a new strategic surveillance system for implementation outside the EU. This uses new technologies to prioritise and mitigate food safety risks.

NFU vice-president Stuart Roberts said the industry needs to recognise and promote the message that the UK is a world leader in combatting antimicrobial resistance as part of its very high food standards. 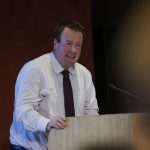 He believed that three factors will affect agriculture’s ability to feed the growing population – climate change, water availability and the growth of antimicrobial resistance in pathogens – farmers and their advisers will have to be proactive on all three issues.

Outside the EU, the UK can’t hope to compete in the global food market on price, Mr Roberts continued. Therefore, it will have to differentiate its food products on production standards, particularly animal welfare; environmental protection; and food safety. This will need the political commitment not to undercut UK output through imported products made to standards unacceptable of even illegal in the UK, allied to consumer education so they appreciate the difference. This would be a challenge to the food service and catering sectors, and for politicians seeking quick trade deals with non-EU countries.