This year’s annual David Black Award, which recognises an outstanding contribution to the UK pig industry, has been made to Yorkshire farmer Richard Lister, who is also chairman of the National Pig Association (NPA). 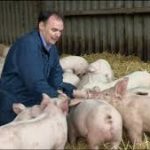 The presentation, by AHDB pork sector board chair Mike Sheldon, occurred as part of the National Pig Awards held in London earlier this week.

Mr Lister, whose operations stretch across Yorkshire and Nottinghamshire, played a leading role in helping to establish and implement the first pig industry targets to encourage the responsible reduction of antibiotic in pig production, as part of the RUMA Targets Task Force.

“Richard has been a force for good, leading the way and demonstrating, on his own unit, the benefits of investment in health and biosecurity,” said Mr Sheldon. “He leads the NPA with a strong voice and remains determined to ensure the sector is represented fairly and accurately to the wider industry, government and consumers.

Mr Sheldon praised the pig industry’s achievement in reducing antibiotic usage by more than half in recent years. “I’m honoured to receive the award as part of the industry-wide effort to reduce and refine antibiotic usage, but there is still more work to be done,” commented Mr Lister.

• The NPA Allied Industry Member of the Year award was also presented on the same evening, and was won by MS Schippers, the Dutch livestock equipment and biosecurity product supplier.
The business was selected from a shortlist of six by NPA members in an online poll. Other finalists were the Bishopton Veterinary Group; Huvepharma; Meadow Quality; Primary Diets and Zarkos-Smith Associates.