End of an era at Mole Valley Farmers

Mole Valley Farmers (MVF) chief executive Andrew Jackson has announced his intention to retire from the position after 20 years of service. He will be succeeded by the co-operative’s current retail sales and operations director Jack Cordery. 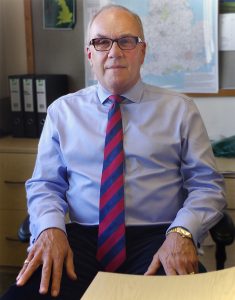 The board’s succession plan sees Mr Cordery become deputy chief executive from the beginning of 2020 and then chief executive on May 1st when Mr Jackson steps down, although he will remain in a supporting role through to the autumn. After leaving the business, Mr Jackson intends to take some time out before considering his options.

Mr Cordery started his career at Allied Grain in the South West, moving to MVF and then BOCM Pauls as a raw materials buyer. He returned to MVF in 2012 as general manager of the Mole Valley Forage Services business, before taking on a series of business change and IT projects for the business that was hi achieve a directorship of procurement and supply chain in 2016. He is also a past president of the Bristol Corn and Feed trades Association.

Mr Jackson’s tenure has seen the farmer-owned business develop from a mainly agricultural retail-focus to a business that is a major national ruminant feed manufacturer and distributor. During that time, annual revenues have grown from £65 million to nearly £500m.

“It has been a privilege and honour to serve as chief executive over the last 20 years,” he says. “I have endeavoured to play a part – along with many colleagues old and new – to uphold and modernise our founding principles that have underpinned the progress of the company to the level it is today.

“Throughout that process, the core principles of providing value and support with integrity to farmer members and the wider agricultural community have remained.”

Mr Cordery adds: “I’m incredibly proud to be given this opportunity to lead the business and build on everything that Andrew has achieved. I’m passionate about our sense of purpose and potential to help improve profitability for our farmer members.”