Villiers fails to convince over defence of UK farm standards

Defra secretary of state Theresa Villiers, opening this week’s Oxford Farming Conference in the wake of the new Conservative Party majority in Parliament, said the post-Brexit agriculture era is almost upon us. But she failed to convince delegates that UK farm and food standards would be championed when negotiating post-Brexit trade deals, especially with the US. 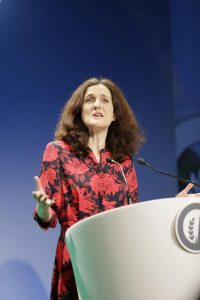 Mrs Villiers said now the Parliamentary deadlock over Brexit is broken, Defra, which has the largest legislative programme in Whitehall, can push ahead with the Agriculture and Environment
Bills. The Agriculture Bill will come before Parliament by the end of this month, with a supporting policy statement outlining the government’s direction. The Bill should be enacted by the spring – possibly as soon as April or May.

The draft legislation is substantially the same as that first put forward by Michael Gove, but with more emphasis on fairness across the whole food chain; and adding a regular series of reviews on food security. The Bill will be central to the government’s ambition to be carbon neutral by 2050 through improved farm productivity and sustainability.

Turning to farm support, Mrs Villiers said the election mandate would enable the government to “sweep away” the CAP and replace it with a fresh approach. She said the Treasury would guarantee UK farm support at CAP levels for the 2020 scheme year, but that direct payments would start to be reduced from 2021 in a phased seven year process as originally envisaged – the NFU and farm lobbies had pressed for a two year delay to reflect the time wasted since the draft Bill was first published.

The new Environment and Land Management Scheme (ELMS) to succeed the direct payments system by rewarding public goods with public money is being piloted on 38 farms. Mrs Villiers expressed confidence that the scheme would be fully operational within seven years.

Addressing future trade, Ms Villiers stressed that the British food and drink brand would be based on high production standards. ”Brexit and higher standards can go hand in hand as the UK negotiates trade deals with EU and third countries,” she stated. She was confident that the UK ELMS scheme will be complIant with WTO rules rather than being seen as a state aid.

“We will not dilute environmental, food safety or animal welfare standards – we will defend these and walk away from trade deal talks if they are not in the national interest,” declared Mrs Villiers. The minister added that the UK would be able to put tariffs on imported foodstuffs that were below UK production standards, such as chlorinated chicken and hormone -treated beef.
Many questions to the minister focussed on how robustly she would defend UK food standards in trade negotiations. Then chairman asked delegates how many were confident that UK standards would be defended in trade negotiations. Not a single hand was raised.

In further questioning, the minister admitted it would be difficult balancing devolved agricultural policies with a single UK trade negotiating position; and refused to endorse a call for a mandatory EIO bioethanol inclusion standard to revive the UK’s renewable fuels industry – rather she said the transport secretary is exploring the issue. The Friends of the Earth speaker on the same panel was robust in excoriating the use of food crops for fuel.

David Hutchinson asked the minister for reassurance that the government would support the continued use of glyphosate as an essential tool in less intensive arable production systems, and allow the industry to benefit from gene editing technologies. She was guarded in response, saying the government would be guided by the science, whether over pesticides or genetic modification.

NFU president Minette Batters called for a Food Standards Commission to be established through the Agriculture Bill to ensure UK foodstuffs standards were not undercut by unfair competition from imported food products not subject to the same production standards. Mrs Villiers was non-committal, but pledged to take the message back to government.