Carr’s non-executive chairman Chris Holmes has retired from the company after 29 years in leadership roles. 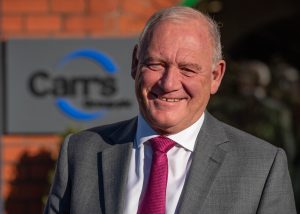 Mr Holmes joined the then Carr’s Milling Industries in 1991 as managing director of the Agriculture division, becoming group chief executive three years later and taking the chair in 2013. His leadership saw the group grow from UK annual revenues of £70 million to an international business generating global revenues of over £400m with half the profit from overseas activity. Net assets have increased from £12m to £131m in the same period.

“Chris has been a joy and an inspiration to work with and, on behalf of the entire Board, I’d like to place on record our thanks to him for his time, dedication and energy that he has given to Carr’s Group over the last 29 years, helping shape the successful business that it is today,” says Mr Davies.