The grain silo at the Tilbury export terminal in Essex will be closed for at least the month of July, after a fire there last week. But the owner has secured alternative storage to enable operations at the terminal to continue. 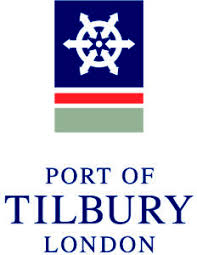 The deep-water port on the Thames is one of the country’s major grain exporting facilities with an import/export capacity of around 2 million tonnes. Frontier Agriculture agreed an eight-year deal to use the terminal with its owner, the Port of Tilbury – part of Forth Ports – from July 1st 2015. There are two flour mills – owned by ADM and Allied Mills – on the same site.

“Following the explosion at the Tilbury Grain Terminal on Friday July 3rd, our initial efforts have been concentrated on working with Essex Fire Service to contain and eliminate the fire in the affected area of the silo and to protect the area of the silo which was unaffected by the explosion,” states Peter Ward, commercial director at the Port of Tilbury. “Operations at the silo itself will be closed until at least July 31st and we will provide a further update on this during the month.

“Grain handling and storage services however are still available from July 9th within the Port of Tilbury for our customers. We have complemented this with a significant quantity of offsite storage which has now been secured to back up quayside handling and storage. We will continue to service our customer and farming base for both imports and exports of agricultural products to the best of our ability during this period of disruption.”

Earlier, the company had reported the initial Friday explosion at the grain terminal, with no injuries to people. But “late night Sunday July 5th, fires ignited in a number of the grain silos and the Fire Service contained these during the night”. 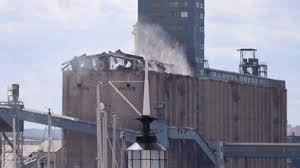 Essex Fire Brigade had brought the initial fire under control, with grain allowed to smoulder in the top of the silos under the watch of two fire crews while unaffected grain was removed to prevent it igniting.

The Sunday fire required eight crews to bring under control, with a further seven crews called in to create a secondary water supply. Firemen worked through the night to extinguish the fires in sections. “This will be a protracted incident with crews remaining at the scene over the coming days working alongside engineers to minimise the impact on the grain site” said the Brigade.

“The cause of the initial explosion will be the subject of a thorough investigation by the relevant authorities and we expect that it will be some time until the results of that investigation are known,” added the Port of Tilbury. “Our sincere thanks to the emergency services – Essex Fire Service in particular – and our own team members for their continued support. The remainder of the port is fully operational.”

The fire occurred in the right-hand side of the original concrete grain silos that were constructed in 1969. It appears to have destroyed conveyors and associated structures on top of the silos.

Frontier says that any enquiries about the incident should be directed to the Port of Tilbury. “Frontier will work with the Port in order that any impact on Frontier’s normal activities to support farmers is kept to a minimum and alternatives are sought where appropriate,” said a spokesman.