The UK faces a wheat shortfall in the new marketing year, but it is going to be against a background of a well supplied world market. 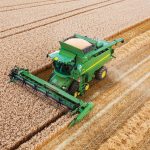 Stuart Attridge, trader at Harlow Agricultural Merchants, told Agritrade News that protein levels in harvested wheat is down. He described the market as “very mixed,” noting there is expected to be a one and a half million tonne shortfall.

There would be “imports from somewhere, Canadian, German, Polish who knows where else,” he explained. “It’s a balancing act on currency and import values generally.

“Most of the wheat otherwise is pretty good quality apart from the proteins, so the Group three and four varieties will get incorporated somewhere down the human consumption route,” he added. “It’s all going to be down to the balances and imports and what happens on the world market values as well.

“You’ve got the shortfall internally, but the world market looks well supplied,” Mr Attridge continued, noting a “bigger Russian crop, bigger Aussie crop, the US seems OK and a reasonable maize crop. The Russians are still the biggest supplier on the block,” he pointed out.

AHDB reported on Monday (10 August) that Russian news stories had been a key driver in lowering world grain prices last week. “Recent upward area revisions have been followed by improved yield expectations from some key forecasters,” it said. “SovEcon highlighted that yields are now ahead of the past two seasons. Elsewhere, Russian firm IKAR revised its wheat production estimate up by 1.5m tonnes to 81m tonnes.”

The Board’s commentary also highlighted the expectation of a record wheat crop in Canada. “Production is estimated at close to 39 million tonnes, more than the current record of 37.6m tonnes set in 2013, according to one advisory firm in Canada,” it said.

AHDB’s analysts explained that “the larger wheat harvests expected in Russia, Australia and Canada are weighing on global prices,” adding that “this is moving EU and UK prices lower.” They cited reports that French production will be down by around a quarter from last year to 30 million tonnes, although they also noted that “Germany’s crop conditions are better and may help to offset some of this decline in production in the EU.”

The USDA’s attaché in Paris published a report dated 5 August giving a range of estimates for the French 2020 wheat crop of between 29.5 and 29.7m tonnes, “because of unfavourable weather conditions. Barley production is also down from 2019 but there may still be a good corn crop despite persistent drought throughout France.”

Barley could change the dynamic somewhat in the UK. “I think the balancing act there is what these spring barleys come in like,” Mr Attridge said. “They are yielding well but of course they are not malting quality in any shape or form. Are they going to come out