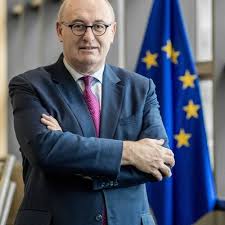 Mr Hogan was one of more than 80 guests at a golf club dinner at Clifden, County Galway in Ireland earlier this month, in excess of the maximum allowed. Mr Hogan had flown in from Belgium, a high-risk country, to attend the event and so should have self-isolated for a period. The dinner was also attended by Irish agriculture minister Dara Calleary who has already resigned.

In a resignation statement, Mr Hogan said: “It was becoming increasingly clear that the controversy concerning my recent visit to Ireland was becoming a distraction from my work as an EU Commissioner and would undermine my work in the key months ahead.”

Mr Hogan assumed the EU Trade portfolio in November last year under new European Commission president Ursula von der Leyen. Before that, he was the agriculture commissioner from 2014-19. His trade role included oversight of the post-Brexit EU-UK trade talks as well as trade negotiations with other countries.

Ireland will have to nominate a new Commissioner, but the award of the trade portfolio is in the gift of Ms von der Leyen. NFU EU Exit director Nick von Westenholz believes the departure will not have a direct effect on the EU-UK negotiations as Mr Hogan did not have day-to-day involvement, but his experience will be missed.

But the head of the Irish Creamery Milk Suppliers Association is reported to have described Mr Hogan’s departure as “cutting off our Brexit nose to spite our Covid face”.