Currency – with a sharp fall in the pound driven by Brexit politics, followed by a limited recovery – is the dominant factor in the domestic wheat market at the moment. 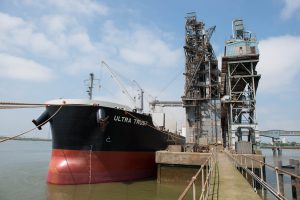 “You’ve got to be a currency trader to make this one work at the moment,” Stuart Attridge, trader at Harlow Agricultural Merchants, told Agritrade News. “I wish somebody in Number 10 or Mr Barnier would tell us what’s going on, because it would make our lives a lot easier.

“We had a very weak moment Friday evening/Monday morning,” he explained, referring to the pound’s recent movements. “Sterling has got a bit stronger since then which is taken four quid off our base prices”

“This year the UK is potentially one of the biggest wheat importers in Europe,” he pointed out. “The price of German, Polish or northern European milling wheat imports, feed wheat or maize coming in, they’re suddenly worth a lot more money.

“Our domestic market has to follow accordingly. Simple as that,” Mr Attridge added. He wondered where values could go, particularly with uncertainty about whether tariffs will be applied after EU transition ends in the New Year. It could mean large scale grain buying before Christmas, with stores filled to ensure supplies.

“It’s a very difficult market to trade,” he continued. “The grower’s got a smaller crop. He just wants to sit on the fence a little bit and try to maximise his sales. We have had some phenomenal values in the last seven days,” Mr Attridge concluded, noting that there had been some selling by farmers, to “keep the market fed if nothing else.”

AHDB senior analyst James Webster noted in a report on Wednesday that currency has been “pivotal to the value of domestic agricultural prices in recent weeks.The 4.4% devaluation in the value of sterling against the dollar between September 1st – 11th pushed nearby UK feed wheat futures up £7.65/tonne,” he added. “Since Friday, the value of sterling has recovered slightly as it begins to retrace its steps.

“Where sterling goes next will have significant ramifications for the value of agricultural products and inputs,” he said. “The path for the currency is not exactly plain sailing either, with a number of upcoming political and economic drivers that could have a very large sway upon agricultural prices.

“With UK wheat trading at or close to import parity, currency will be a key driver for prices,” he said. “Any continued weakness in sterling would support prices, but also make imported inputs such as fertiliser and fuel more expensive.”

The effect of currency means that the UK is bucking a global trend. AHDB reported on Monday that “Chicago wheat futures prices were lower Friday-Friday as global wheat supplies look increasingly comfortable and the US dollar index regained some strength.” The Board noted that crop forecasts in Russia and Australia had been revised up.

“A La Niña weather event is confirmed to be underway,” it went on. “This supports crop potential in Australia but poses a threat to Argentinian wheat crops.” However, the latest USDA forecasts showed that increased wheat production in Australia and Canada was more than enough to offset a cut for Argentina.