A firmer pound in recent days has cut oilseed rape prices and reduced the level of market activity as sellers of the crop hold back in the hope of a recovery. 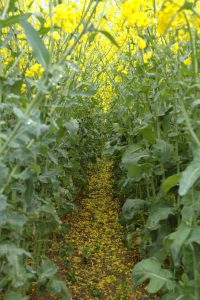 John Thorpe, senior trader oilseed rape at Openfield Agriculture, said that a firmer pound had dampened activity. “It has taken a bit of a hit with currency,” he told Agritrade News. “There were not many sellers to start with, so with a falling market there are even fewer sellers. It is quiet.”

After the firm markets seen earlier in the month, “it’s all pushed back down without any sellers,” he noted. “It’s difficult to find sellers at the lower levels.” Harvest pressure in the US soyabean market has pushed global oilseed prices down, with currency magnifying the effect for UK rapeseed.

“If you are a grower you have one bullet to shoot and you have to wait to shoot that bullet,” Mr Thorpe commented. “At the end of the day yields were not very good so they have to capitalise with the best price they can.”

He described the market’s situation as a “Mexican standoff,” with sellers looking for prices well over £350 a tonne, while buyers were after the low £340s. “Then you have got ADM Erith, theoretically, even though they haven’t confirmed it, coming back on-line by mid-October, so they’re bringing another 80,000 tonnes coming on stream a month,” he said. “At some point there will be a tight pinch.”

The International Grains Council, in its Grain Market Report of 24 September, noted that “with Euronext rapeseed futures mostly maintaining a strong premium over equivalent wheat contracts since June, it was assumed that 2021/22 EU-27 rapeseed plantings would rebound quite sharply. However, owing to excessively hot, dry weather in France, there is a risk that not all the intended area will be sown.

“After a slump in acreage in recent seasons, solid yields from the latest harvest are expected to spur additional plantings in Germany, where seeding conditions have been generally favourable,” it said. The IGC also observed that drought in Ukraine had been made worse by warm and dry weather in the first half of September, raising doubts that an initially predicted area increase would actually happen.

On the markets, IGC said that “buoyed by strength in the soyabean market and mild worries that crop quality could be lower than initially anticipated, canola export prices in Canada rose. New crop export values in Australia were fractionally lower month-on-month as pressure from good production prospects outweighed support from potentially solid export demand hopes.”

Global soyabean prices had risen by 13% in a month, touching the highest levels for four years, with “sharp gains at all key origins,” the IGC noted, highlighting worries about US yields and “strong buying interest from China.”

“Crop concerns were highlighted by a series of downgrades to weekly condition ratings, with USDA’s mid-month supply and demand update incorporating reduced projections for production and stock,” it added, also reporting tight old crop availability in Brazil, “after a season of heavy overseas sales, providing support to export premiums.”