Political uncertainty and its potential effect on costs and currency values are affecting UK wheat trading, with buyers and sellers further apart than might be expected. 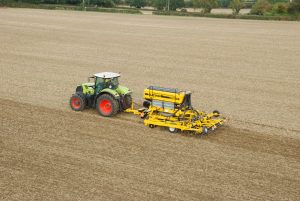 “Pre-Christmas, most consumers seem comfortable with what they have bought,” Stuart Attridge, trader at Harlow Agricultural Merchants told Agritrade News.

“But the New Year is full of mud and mystery,” he complained, citing political issues, Covid-19, currency values and the approaching US election – which could affect the values of commodities priced in dollars – as factors which introduce uncertainty. Long fund positions and the weather contributed to the problem. “If you know the answer to any of those let me know!” he said.

“Imports will not be offered,” Mr Attridge continued. “They can’t be offered tariff -free because we don’t know what we are dealing with in the New Year.

“Any of these consumers – whether they are a maltster, a brewer, an oat miller, a flour miller or any form of end consumer – if they make a sale of an end product in the New Year, they have to tempt the grower to back him off and part with something at the other end of the chain,” he explained.

“It is highly, highly volatile,” Mr Attridge added. “There are good barley exports going on before Christmas, so there’s good demand for that all the time but certainly this week it has been much more difficult to be able to price stuff aggressively. Everyone has taken their foot off the gas a bit.”

“We are a fiver off market highs, and it is actually very, very difficult to market stuff,” he concluded. “The buyers and sellers are almost a fiver apart at the moment. That’s the problem.”

AHDB reported on 12 October that the UK imported 218,900 tonnes of wheat in August, the biggest monthly volume for two years. Maize imports were 304,000 tonnes in the same month. “With the smallest domestic wheat crop since the early 1980’s and the possibility of tariffs looming next year, it is expected that UK flour millers will be importing more wheat this side of Christmas,” it said.

“Likewise, with maize pricing competitively into certain UK regions, especially in the North and Northern Ireland, it is likely that more maize will be coming in for use in animal feed/bioethanol in these areas.” It also noted strong barley exports in August at 104,900 tonnes. AHDB pointed out that Defra’s latest figure for the 2020 wheat harvest is 10.1 million tonnes, a 38% fall from 2019, with the barley crop up 4% at 8.4m tonnes.

The US Department of Agriculture in its World Agricultural Supply and Demand Estimates report, published on October 9th, characterised the global wheat outlook this season as “for larger supplies, increased consumption, greater exports, and higher stocks. The big change for wheat is an extra five million tonnes added to Russia’s forecast crop, bringing it to 85m tonnes, the second highest output on record for the country.

“The increased production is based on updated harvest results as reported by Russia’s Ministry of Agriculture, which imply record spring wheat yields,” it said