The AIC held its annual Agribusiness conference last week – the first in a virtual format – with speakers addressing the theme of Creating resilient and sustainable food supply chains.

Keynote speaker Victoria Prentis MP, Parliamentary undersecretary at Defra opened proceedings. She noted that Royal Assent for the Agriculture Bill was expected on the day of the conference – while its passage had been difficult at times, especially over animal welfare and food standards, she wanted to emphasise that government was on industry’s side.

Moving away from the “CAP comfort blanket” would allow support to be targeted towards a more productive food supply as well as biodiversity and the environment. More details will be released in the coming weeks. But farmers would be incentivised to increase profitable production – the new regulatory system was being developed with farmers and would encourage active participation rather than seeking to penalise noncompliance.

Change would be difficult for some, she conceded. The new Bill guarantees the agricultural budget for this Parliament (up to 2024) but could not provide guarantees beyond this. The priority is to get the industry into a good shape to adapt to ongoing change. 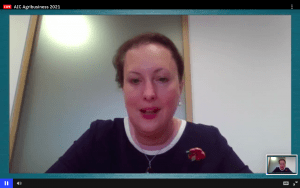 The minister said Defra was aware of the AIC’s call for open partnership and a sustainable roadmap, mitigating climate change through moves such as low emission fertilisers and more carbon capture. Defra understood the vital role of best advice and support from trusted farm advisers on issues from soil health and animal welfare to offsetting carbon.

She added that the agrisupply sector would be pivotal over future years in encouraging greater productivity and sustainability at farm level and profitable food production. The ambition is to produce more UK food – especially horticultural crops – using more technology. The difference should be obvious within a decade.
As the end of EU withdrawal transition approaches, Ms Prentis was hopeful of a good free trade deal with the EU – “contrary to all the noise” – and stressed that the UK would not compromise on food and animal welfare standards. She conceded it “was not great that there is no agreement 50 days out”, and apologised to importing and exporting businesses, while partially blaming the EU. “There will be bumps in the road – we have tried to smooth those we know about. We are engaged with industry and are ready to learn from specific instances.”

The way we look at inputs such as fertilisers and pesticides will have to change in a more sustainable future, the minister concluded. And future productivity will require new technologies such as gene-editing. While it was too late to include an Agricultural Bill amendment to allow this, government is keen to promote bioscience and will launch a 12-week consultation on the issue imminently.

AIC chief executive Robert Sheasby said it had been an unprecedented year of challenges for the agrisupply sector – from the weather and poor 2020 crops and yields to Covid-19. At the same time, the lack of progress on the EU trade talks meant that member businesses had to plan and invest for a worst case no-deal outcome – especially with Northern Ireland businesses and border checks.

The AIC is involved in government working groups to reflect trade concerns, but Mr Sheasby emphasised that government could do more to use industry to inform its negotiating stances. He welcomed both George Eustice and Victoria Prentis’ highlighting the vital role of trusted farm advisers in raising farm productivity, but again, asked for more clarity on how government will encourage this in the new support regime.

Turning to climate change, he highlighted the AIC sustainability roadmap project led by Jane Salter, covering the sourcing of raw materials, their distribution and usage on farm. This was the start of articulating activity to show where innovation and interventions are needed to help meet the national net zero target by 2050.
But the current urea consultation showed the danger of a simplistic approach to very complex problems, he concluded. If the growing world population is to be fed, short term measures won’t work – there has to be a balance between food production and the environment.

NFU president Minette Batters noted there is a “terrifying lack of information” on the UK’s post January 1st trading with the EU and the rest of the world. 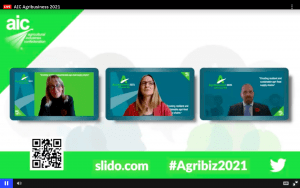 Outside the CAP there should be more opportunities for sustainably produced food and fibres from UK farms. Exporting will become essential – but the UK has become a “lazy exporter” while relying on the big EU market. There is the opportunity to leverage USPs such as data, assurance and traceability – but we need the evidence. The UK cannot compete on scale but could on branded foods and fibres that deliver on carbon-neutral attributes as the world becomes less reliant on artificial sources.
UK agriculture is an exemplar over issues such as responsible soymeal usage, antibiotic reduction and the responsible use of plant protection products – government must stand behind the industry and not erode this leadership, she stressed.

There must be investment in farm productivity to cope with the 50% cut in CAP support levels after 2024, plus a three-year food security monitoring process. The AHDB would be critical to future success – Ms Batters called on government to match fund the £60m raised through producer levies each year.

Lord Deben – former agriculture minister John Selwyn Gummer – who chairs the Climate Change Committee advised that the Agri-food sector will play a critical role in helping meet the legal requirement of net zero emissions by 2050 – as set out in the Paris Agreement. China, Japan and South Korea are now committed, and a Biden presidency should see the US return to the fold.

While the direction is set, it will be a politically difficult journey, he warned. There is no alternative if the planet is to sustain life in the longer term – but restricting the temperature rise to 2 degrees centigrade will affect farming and its suppliers. Soil fertility must be restored around the world to sequestrate carbon in mitigating climate change.

Furthermore, Lord Deben warned Agrifood may have to go further than net zero emissions, in order to offset the natural emissions from human beings and from some activities deemed to be essential, such as aviation.

New AHDB chairman Nick Saphir advised that most UK farmers and growers are too preoccupied with short term business pressures to take a longer-term view on trade, competitiveness and climate change.

The way forward is to invest in lifting levels of business acumen; working towards better supply chain co-ordination; and not attempting to compete with global commodity producers but aiming higher for branded food and drink products.

Farm productivity can be improved through KPIs and simple tools and measures – realistically, 75% of farmers should be benchmarking. AHDB can help with data sharing, measurement and driving out waste.

US farmer and entrepreneur Rod Snyder agreed that benchmarking is helping US farm businesses to improve their productivity and measure progress against sustainability goals. His Field to Market software suite supports the agri-food supply chain’s efforts to measure the environmental impacts of commodity crop production and identify opportunities for improvement.

Professor Fiona Smith, Chair of International Economic Law and N8 Chair of Agri-Food Regulation at the University of Leeds, saw a positive outlook on trade opportunities for the UK’s agri-food sector, despite the uncertainties around specific trade deals.

“The UK is re-writing the rule book as it leaves a major trade deal with its geographic neighbour. But I think the UK Government is on track to produce some really interesting trade agreements that will help embed sustainability into the supply chain,” she said.

She noted that while value remains important for consumers, there is an increasing interest in where and how food has been produced. “Improving the understanding of food production can help consumers make better choices,” she stated.

Reflecting on this year’s conference, organiser John Kelley, managing director of AIC Services observed: “Agribusiness was very well attended and was well received by
both members and stakeholders. There was a high level of engagement, both with the online questions and the Slido polls.

“A key comment from delegates was that if possible they would like Agribusiness 2022 to be a physical event as the networking with others is vitally important. AIC will work on this basis but will be guided by the rules in place to manage the pandemic by the government at the time.”