Wild oat populations appear to be increasing across the UK, warns herbicide manufacturer Life Scientific. Growers are burying less seed as they switch to more min-till and direct drilling techniques, while a reduction in ALS herbicide chemistry usage – for fear of driving blackgrass resistance – is also affecting wild oat control.

The Irish off-patent agrochemical specialist and NIAB collaborated over the first survey of UK wild oat incidence for some twenty years, with UK growers and advisers offered free wild oat resistance testing on samples from their holdings. 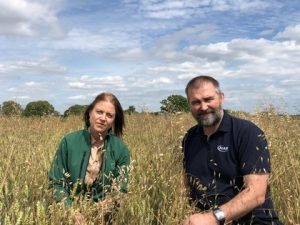 “We felt it was really time to provide an updated picture of wild oat herbicide resistance, and also a general picture of where we are with wild oats currently across the UK,” says NIAB’s weed biology specialist, John Cussans.

“The initial findings point to cases of resistance in both species to both Axial Pro and Niantic, with the study confirming that the occurrence of resistance is indeed higher in the winter wild oat (A sterilis),” says Mr Cussans.

She says the priority for farmers and agronomists is to understand more about the two differing wild oat species; make better use of existing herbicide products – especially getting application timings right relative to growth stages and conditions; rotating active ingredients to maintain the relatively low-level of cross-resistance between herbicides in both species; and using some element of cultural control in addition to herbicides.

“Although we’re getting more and more reports of wild oats as a problem weed, it’s reassuring to know from these survey results and the resistance testing that ALS chemistry such as Niantic and Cintac still works and has a valuable place in the herbicide programme to provide efficient control,” Ms Stanley concludes.