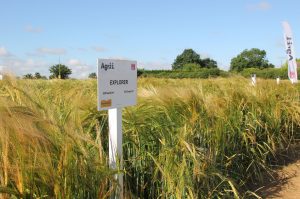 Seed for Explorer, bred by Secobra in France, is available to contracted growers through Agrii together with an agronomy package to produce the high 1.75-2.05% nitrogen specification that Budweiser requires. The barley is contracted through Viterra UK, which collects and delivers the crop for processing at Crisp Malt’s Great Ryburgh maltings in Norfolk, before delivery to the Budweiser brewery in South Wales.

“After the disappointing barley markets of the past two years, though, we and Viterra feel it is only right we underline our commitment to Explorer growers with the additional assurance of a guaranteed minimum premium over feed barley through our 2021 buyback contract.”

Through the closed chain, Budweiser has been able to progressively replace all its previously imported supplies for British brewing with home-grown barley since 2015. It now sources 100% of the 40,000-tonne annual requirement from British growers, which has both reduced the brewer’s carbon footprint and improved its production security.