The AIC has written to Cabinet Office minister Michael Gove over difficulties faced by British exporters of feed materials and finished feeds to the EU and Northern Ireland since January 1st. The sector’s problems reflect wider British export tensions with the EU.

The Confederation says the current implementation of the EU-UK Trade and Co-operation Agreement is causing significant problems in the export of specific feed products, resulting in lost revenue to British businesses through delays and increased costs to Northern Irish and EU customers.

The British Chambers of Commerce (BCC) estimates that half of all British businesses exporting to Europe have faced additional form filling and border controls in the first month since the Brexit transition period ended. There is also confusion over which rules apply to what goods.

The BCC warns that January 2021 trade flows were much reduced from a normal January as many businesses had stockpiled goods ahead of the deadline, on top of Covid-19 disruption. It adds that the situation could get worse after April 1st when full sanitary and phytosanitary checks on food come into force, with full customs controls on imported goods to follow from the beginning of July. The BCC has urged the UK government and EU to address the severe issues affecting cross-border trade.

In his letter to Mr Gove, AIC chief executive Robert Sheasby writes: “After a month of trying to achieve technical solutions to the export problems faced by feed businesses, it is clear that this issue cannot be resolved without political intervention.

“Problems have been particularly challenging for feeds containing animal by products such as milk and milk derived products; gelatine and collagen; hydrolysed proteins; eggs; dicalcium phosphate; chondroitin; and glucosamine. The requirement to complete Export Health Certificates (EHC)s for feeds containing these products is particularly challenging as suitable EHCs do not exist and GB suppliers are not listed on EU approved establishment lists to supply such feeds into the EU.

“Our members, ranging from multinational businesses to SMEs, have found no way of practically exporting such feeds to the EU and Northern Ireland.” 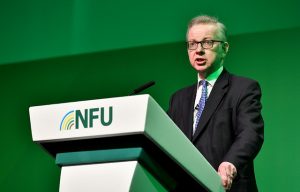 The AIC has asked Mr Gove to raise the issue with the European Commission as a matter of urgency, in order to achieve the clarification and certainty that feed sector businesses require. The UK is understood to be seeking a two-year transition period for the Northern Ireland Protocol, but had undermined its case by turning down the opportunity of a wider EU trade transition period in July 2020.