Steve Ellwood is to be the next chairman of the Wynnstay Group subject to approval at the company’s annual general meeting on March 23rd. He succeeds Jim McCarthy who is stepping back after ten years on the board, the last eight in the chair. Mr McCarthy will remain as a non-executive director until the end of July to allow a smooth handover. 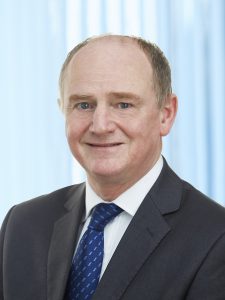 Mr Ellwood joined the Wynnstay board as a non-executive director in January 2016. He worked for HSBC Bank for 25 years, the last 10 as head of agriculture, followed by five years as head of food and agriculture at the Smith & Williamson consultancy. He is also chairman of AH Worth, the fresh produce group and a non-executive director of both the NIAB Group and corporate farmer Velcourt.

“I am delighted to handover to Steve,” says Mr McCarthy. “He is highly experienced, with significant knowledge of the sector as well as of Wynnstay. I have no doubt that he will help to drive the successful execution of the Board’s strategy and wish him and all my colleagues every success.”

Mr Ellwood adds: “I am excited about the Group’s prospects. Wynnstay is very well-positioned, both operationally and financially, as the agricultural sector embarks on a transition set by Brexit and the UK Agriculture Bill. We believe that there is a clear opportunity for Wynnstay to assist UK farmers to feed the nation in a more sustainable, environmentally-friendly and profitable way.”