Based on early crop condition reports, the AHDB estimates that wheat production in Great Britain from harvest 2021 could reach 14.57 million tonnes – considerably up on 2020’s poor figure of 9.61m tonnes and 6.6% higher than the five-year average of 13.67m tonnes. 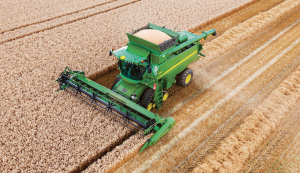 But it warns that last year’s small harvest and consequent minimal 2020/21 carry out stocks means that even a 14.57m tonne crop will not meet likely domestic demand, meaning that the UK would be a net importer in the 2021/22 season.

The AHDB has adopted the USDA system of classifying developing crops from very poor to excellent and uses ADAS to provide the field data. The second ADAS crop development report for 2020 assesses the overall crop as 63% good to excellent (48% good and 15% excellent). Just 7% of the area is rated as poor or very poor, compared to 18% at the same stage of 2020.

“Demand for wheat next season is likely to be strong, with the return to production at Vivergo in 2022,” notes AHDB analyst James Webster. “An important area in which to consider the supply of wheat is the North of England and Yorkshire. With strong demand in this region from bioethanol, starch, milling and feed, the area is often in deficit.

“Wheat production in Yorkshire, the North East and North West is provisionally forecast at 2.57m tonnes, just 68,000 tonnes ahead of average. If there are production issues between now and harvest, we may need to see delivered premiums stretch to pull wheat north or drag in imported wheat.

“With this in mind, we also need to pay very close attention to the East Midlands and East of England. Production in those two regions is forecast at 6.78m tonnes, ahead of the five-year average of 6.14m tonnes. If premiums extend in the North this wheat will be pulled up the country.

• EU grain trade body Coceral has released its March estimates of European grain and oilseed production for 2021. The UK wheat crop is forecast at 14.90m tonnes, based on an area of 1.82m hectares and an average 8.2 tonnes/ha yield.

The total barley crop is estimated at 7.02m tonnes, including 4.04m tonnes of spring varieties; while the oat crop is put at 1.15m tonnes. The UK oilseed rape crop is forecast to produce 1.12m tonnes, with 330,000 hectares yielding an average 3.4 tonnes of seed.

The total wheat figure is revised down from 143.0m tonnes to 141.5m tonnes, after lower than expected plantings in Germany, Italy, and Hungary. EU-27+UK 2021 barley production is unchanged at 61.5m tonnes (63.9m tonnes last year); and EU-27+UK oilseed rape volume is forecast to recover slightly from 17.1m tonnes to 17.7m tonnes with slightly higher plantings in Germany, France, the UK, Romania, Bulgaria and Hungary.