A UK investment fund is to construct its third largescale glasshouse facility through an £86 million investment at a site near Ely in Cambridgeshire. 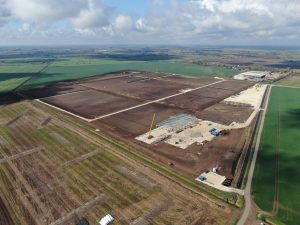 London-based Greencoat Capital, which claims to be one of the UK’s largest investors in renewable technologies, is backed by major UK pension funds. It is the company behind the £120m project to build glasshouses in Norwich and Bury St Edmunds, each with 13 hectares of glass using renewable heat sources to grow tomatoes, cucumbers and peppers using hydroponic systems.

The latest planned 22 hectare glasshouse facility near Ely, one of the UK’s largest, will be delivered by renewable energy specialist AGR Renewables. Also hydroponic, it will be warmed using heat pumps recycling waste heat from a nearby reservoir, rather than the conventional gas heating, with a new combined heat and power (CHP) plant to run the heat pumps and LED lighting. The CO2 generated by the gas-fired CHP plant will be circulated through the glasshouses to further help plant growth while recapturing a high proportion of the carbon.

Once in full production, the glasshouse should produce 35 tonnes of cucumbers per day throughout the year.

“We’re very pleased to have achieved another innovative first in sustainable agriculture, using renewable heat sources to offset the energy consumption of LED lights – saving energy as well as transport-related emissions in the winter months when the UK would generally be importing these vegetables,” notes Greencoat Capital partner James Samworth. “We see considerable opportunity to invest in renewable heat in the UK, providing pensions investors with the predictable returns they require to pay beneficiaries, meanwhile reducing our carbon emissions as an economy.”

Oliver Breidt, co-owner of AGR Renewables adds: “After five years of hard work developing the project and optimising the engineering solution to ensure maximum green benefits, we are excited to be on-site and making good progress on the delivery of the project. We look forward to the facility at Ely becoming operational and contributing towards the UK’s shift towards a greener food economy that’s less reliant on imports.”