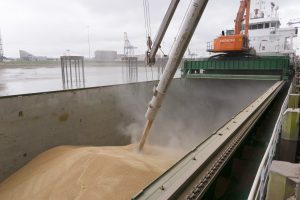 The IGC April report has increased its estimate for world wheat production by 16 million tonnes and maize by 52m tonnes. With barley, oats and rye harvests predicted to fall, the world total grains production for 2021/22 is projected to climb by 61m tonnes to a record 2.287 billion tonnes.

At the same time, the Council expects the net increase in supply of 52m tonnes to be matched by rising consumption, leaving world grain stocks unchanged at 609m tonnes by the end of 2021/22.

But this total masks a fall in maize stocks to a nine-year low, while further wheat end stocks are predicted to increase. The total global grains trade in the 2021/22 marketing year is projected at 409m tonnes, the second highest ever.

Soybean production has been underpinned by bigger crops in the US and Brazil in the 2020/21 year, with global production forecast to rise by 7% from the prior year. But with solid demand, end stocks are expected to fall for a second consecutive season – the US carryover is forecast to be 80% lower year-on-year.

The 2021/22 world soybean production is expected to rise by 6% to a record 383m tonnes, as growers react to the current high prices by planting more acres. At the same time, consumption is expected to rise too, with any increase in ending stocks likely to be modest. The IGC sees world import demand reaching a fresh high, although after last year’s surge in importing activity, global trade is predicted to increase only marginally, but to a new peak.

Against these projections, with strong gains for all commodities apart from rice, the IGC Grains and Oilseeds Index (GOI) has risen by 8% since March to the highest level since mid-2013. The Council says this reflects concerns over weather patterns on developing winter crops and spring plantings -while tighter supply outlooks have sparked solid gains in maize, wheat, soybean and barley export prices.

• The UK May wheat futures price has weakened slightly from the recent peak of £208.85/tonne on April 27th, when the November contract stood at £190.00/tonne. April’s trading has seen the positions recover all March’s losses and more – the previous peak was £206.9/tonne for May 21 and £170.5/tonne for the November position.

The season’s high for the nearby contract was the £213.85/tonne reached on January 19th – when the November position also stood at £170/tonne. But the tightness of the current wheat market is reflected by the July 21 position which has gained £5/tonne this week, while the Jan and March 22 contracts have gained almost £10/tonne to £191.1 and £191.50/tonne respectively.