Oilseeds values have softened, but bullish market factors – from the weather to US policy on biofuels – are still there to give support. Prices well above historical levels mean that the UK oilseed rape crop area is likely to increase for next year. 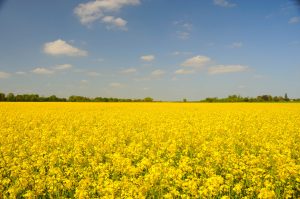 “Values are softening a little bit at the moment,” David Whyte, trader at United Oilseeds, told Agritrade News. “There is a bit of profit-taking.”

“Weather conditions are working in our favour in parts of the UK, France and Germany,” he explained. “It was cold, wet and miserable- generally poor growing conditions – plus a bit of insect damage. People were generally saying this year’s crop was not going to come to much.”

“But today, they reckon the EU crop might be yielding about 3.2 tonnes a hectare for harvest 2021, which would be a year-on-year increase of something just over 5%,” he pointed out. “That’s a positive. Add in the way the conditions in the soya growing areas and the plantings in the US have all improved, and it has taken a little bit of steam from the top of the market.”

Mr Whyte also welcomed moves by US president Joe Biden to look at increasing biofuel inclusion rates in diesel, “which would mean they obviously use more vegetable oil in their diesel. If they did that, it would be quite a big thing for demand.” he said. “That could resurrect prices a bit.

“Nonetheless, although we’ve seen a peak £450/tonne for harvest, but now it is down to £420/tonne, it is still a cracking value,” he noted.

“Quite a lot of farmers are saying that their crops are looking good,” he added. “There is a bit of CSFB larvae in the stems, but not to the extent that there has been.”

“It is exceptionally good value, and it is still worth having,” he went on. “If you look at harvest 22, growers are probably still going to get around £350/ tonne. If they can drill a winter crop and get £350/tonne for harvest movement, then things ought to be in a good place as long as the crop grows like it did this year.

“The Chinese have probably also thrown a little bit of a spanner in the works,” he warned. “The government has called on some of their trading companies and fund managers or speculators to stop hoarding soybeans and oil, as all it is doing is to force the price up.

“They are threatening the possibility of fines and things like that if hoarders are caught, which means that the speculators are not quite as bullish as they perhaps were,” he explained. “All those things are conspiring to ease the values back a little bit. “

“But they are still good values,” he concluded. “I think we will see between a 5% to 10% increase in the rapeseed area, certainly in the UK going forward this autumn.”