Inglis grain stores on the market

FRP Advisory, the business winding up the Alexander Inglis and Son grain merchanting and storage business that went into administration last month, has put four of the company’s grain stores on the market. 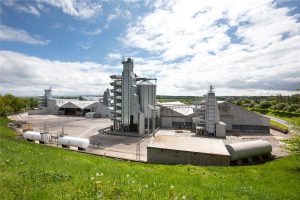 The administrator has instructed the Savills office in Edinburgh to find buyers for the stores at Ormiston, Tranent, where the company was headquartered; Errol in Perthshire, operated by Inglis subsidiary the Tayside Grain Company; Melrose in the Borders and Morpeth, Northumberland. The stores have a combined storage capacity of just over 200,000 tonnes of barley.

Savills associate director Luke French is handling the sale, with the four stores available in a single deal with a £16 million guide price, or as four separate lots. He describes the sales as “a rare opportunity to purchase well-equipped and extensive grain storage facilities across four strategic locations”.

Mr French would like to compete before harvest 2021, so the stores can be used for their core purpose, subject to resolving claims over the grain currently in store.
In a letter to creditors, the joint administrators have confirmed that there are competing claims over the remaining stock. An application to court has been made, seeking directions to assist in agreeing a process for resolving these disputes.

“This involves authorising the company to sell the majority of grain, which is subject to material disputes, with net proceeds being available to valid stock claimants following subsequent adjudication of claims,” says FRP Advisory.

“Given that there is a significant shortage of grain stock relative to claims, the Joint Administrators believe this to be an appropriate and fair solution in difficult circumstances.

“It appears the company did not do so, leading to significant issues in identification of ownership and reconciliation of the stock. As a result, it is not possible to identify any particular stock as relating to any particular contract,” conclude the administrators.

It is understood that some creditors have formally objected to the application for permission to sell the stocks, with a hearing expected within the next fortnight.