Fertiliser manufacturer Yara International has reported a three-fold increase in profitability for the first quarter of 2022, despite a sharp fall in product deliveries. 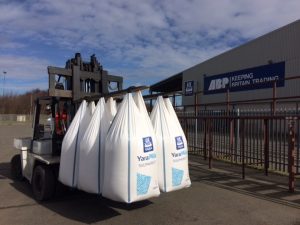 In Europe, Yara’s EBITDA excluding special items was up $154m on Q1 2021 as higher prices more than offset increased feedstock costs and lower deliveries. But deliveries fell by 24% “reflecting reduced demand and customers reluctant to take positions in the current price environment”.

The company cites industry projections that global nitrogen fertiliser production capacity will grow in 2022. However, the outlook is for a continued tight market driven by high grain prices, supply disruptions and low global inventories. The company estimates that Europe’s nitrogen deliveries to date in 2021/22 season are 17% behind the previous season. Deliveries were slow in Q1 2022 and the season total is likely to end at a lower volume. Growers reduced optimum application rates in response to high product prices, despite the higher crop commodity values.

Rising gas prices caused Yara to curtail production at several of its European ammonia and urea facilities in early March 2022, but it says these have now resumed production as the margin situation improved. It notes that gas raw material price increases on their own would be negative for Yara, but rising fertiliser product prices are reflected in higher grain prices – improved farm profitability should lead to demand for agricultural inputs. Yara continues to monitor the situation so it can adapt to market conditions.

The war in Ukraine is having a major impact on both the food and fertiliser industries, as Russia and Ukraine are major world grain producers and exporters – and Russia is one of the world’s largest producers of fertilisers and natural gas. Yara traditionally sources phosphate, potash and ammonia from Russia, alongside significant volumes of natural gas for its European factories but has stopped all sourcing from suppliers linked to Russian sanctioned entities and persons.

“Yara’s business model is robust and is performing well in a volatile situation,” says Yara president and chief executive Svein Tore Holsether. “I want to give credit to our employees for their hard work to sustain our operations and deliveries amid war, supply disruption and market price volatility.

“Although Yara’s business is flexible and resilient, the impact of the war on global food security will be dramatic. We repeat our calls for government action to strengthen food supply chains and decrease dependency on Russia.”

“Yara’s industry fundamentals are robust, as the twin challenges of resource efficiency and environmental footprint require significant transformations within both agriculture and the hydrogen economy. Yara’s leading food solutions and ammonia positions are well placed to both address and create business opportunities from these challenges,” Mr Holsether concludes.